THE NATIONAL HISTORY AND ARCHEOLOGY MUSEUM

According to the satirist Lucian, who provides the only literary reference to the deity, the cult of the snake god Glycon was founded in the mid-second century by the Greek prophet Alexander of Abonutichus. Lucian was ill-disposed toward the cult, calling Alexander the "oracle-monger" and accusing the whole enterprise of being a hoax - Glycon himself was supposedly a glove puppet.

The cult was not simply the product of Lucian's comic imagination. There is solid archaeological evidence of its existence. It probably originated in Macedonia, where similar snake cults had existed for centuries. The Macedonians believed snakes had magical powers relating to fertility and had a rich mythology on this subject, for example the story of Olympias' impregnation by Zeus disguised as a serpent.

At least initially, the cult did not worship an abstraction or a spirit of a snake but an actual, physical serpent that was said to embody the god. According to the cult's mythology, the snake appeared after Alexander had foretold the coming of a new incarnation of Asclepius. When the people gathered in the marketplace of Abonutichus at noon, when the incarnation was supposed to occur, Alexander produced a serpent egg and sliced it open, revealing the god within. Within a week it grew to the size of a man with the features of a man on its face, including long blond hair. At this point the figure resembling this description was apparently a puppet that appeared in the temple. In some references Glycon was a trained snake with a puppet head.

As with previous Macedonian snake cults, the focus of worship at the temple was on fertility. Barren women would bring offerings to Glycon in hopes of becoming pregnant. According to Lucian, Alexander had less magical ways of causing pregnancy among his flock as well. The god was also believed to offer protection against the plague. 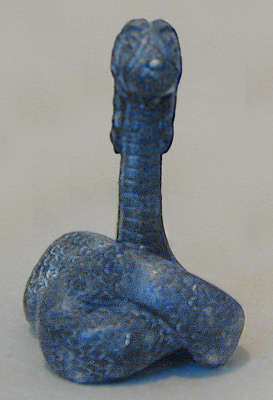 By 160, the worship of Glycon had undoubtedly spread beyond the Aegean. An inscription from Antioch of that date records a slogan, "Glycon protect us from the plague-cloud" that is consistent with the description we have from Lucian. Also in that year the governor of Asia, Publius Mummius Sisenna Rutilianus, declared himself protector of Glycon's oracle. The governor later married Alexander's daughter. According to Lucian, another Roman governor, of Cappadocia, was led by Glycon's oracle to his death in Armenia, and even the Emperor himself was not immune to the cult: Marcus Aurelius sought prophesies from Alexander and his snake god.

Meanwhile, Abonutichus, a small fishing village before the arrival of the cult, became an important town and accepted another name, Ionopolis. It is uncertain what role the popularity of Glycon played in the rise of the city.

In short order Glycon worship was found throughout the vast area between the Danube and Euphrates. Beginning late in the reign of Antoninus Pius and continuing into the third century, official Roman coins were struck in honor of Glycon, attesting his popularity. While the cult gradually lost followers after the death of its leader in c.170, it survived for at least a hundred years thereafter, with Alexander being incorporated into its mythology as a grandson of Asclepius. Some evidence indicates the cult survived into the fourth century. 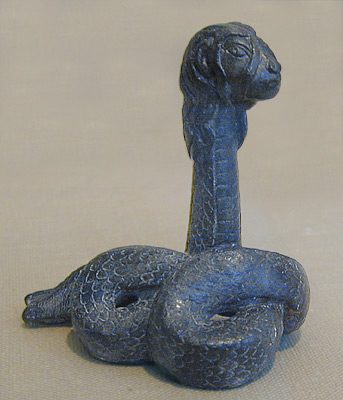 second century CE; said to be from Athens
In the second century CE, Alexander of Abonouteichos, living on the Black Sea, delivered oracles through a supposedly miraculous snake with a human head; Lucian says he fitted a live snake with a human-like mask with shaggy hair.
Boston, Museum of Fine Arts. Credits: Barbara McManus, 2002
Keywords: superstition; oracle; prophecy 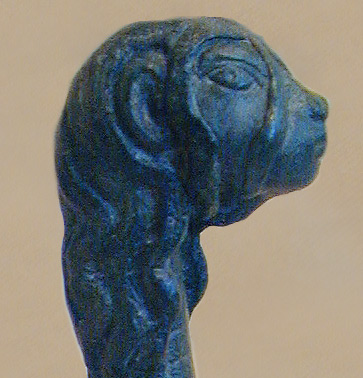 Residual superstitions originating with Glycon were reported by some researchers to continue even into modern times. A Turkish friend of Jona Lendering once told him that in the early 1970s, when he was hunting in the hills near Inebolu, the modern name of Ionopolis, people warned him about a magical snake.

Following his (as he put it) "coming out" as a magician in 1993, the British comic book writer and occultist Alan Moore has declared himself a devotee of Glycon, and has cheerfully admitted in interviews the absurdity of worshiping a probable fraud, a fact symbolic of Moore's stated belief in the "reality" of ideas, including fictions. He has performed spoken word under the name the Moon and Serpent Grand Egyptian Theatre of Marvels.