'From earth to heaven: The snake and the indoeuropean religious change',

(Images  in colour are news)

Music of this page

With this short communication I would like to contribute to this hommenage with the expression of my warmest and very sincerely friendship to proffessor Gimbutas, who has reached the hiqhest scientific level both as a researcher and as a woman inside a society and a scienti field formed and directed by men.

We all know that Gimbutas has been able to get the best and definitive archaeological evidences on the origin and specialization of the Indo-European people, what before her were practically  kept  at almost speculative philological level.

For us and for our own research activities in the field of the old religions, it is specially important the fact that her points of view have been used to support the matriarchal landscape of the Old Europe.

As Brian Hayden said about Gimbutas in his communication on " Archaealogy and fertility " to the First International Conference on Archaeology of the Ancient Mediterranean, occasion in which we had the pleasure to meet her, Gimbutas herself is somewhat ambivalent as to here exact position (HAYDEN,B.. 1985; 17-30).

Gimbutas (1982: 237) realised that both, the male and the female divinities, manifesting side by side, the sacred male force strengthening the female creative force, without any kind of subordination of one another. 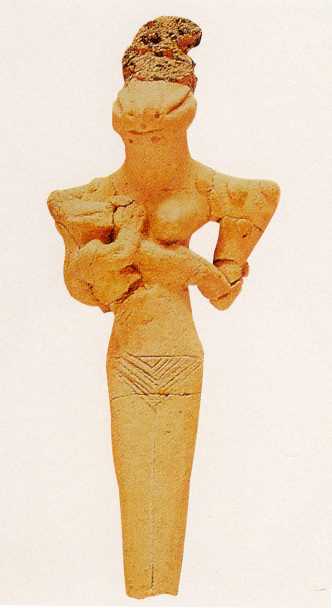 In this sense, each of these two powers complemented one another resulting of such addition a double power.
In social terms, from this statement it can be said that women were not subordinatte to men and that all the human resources in the Old Europe societies were used to the full.

The Great Goddess of Animals, Kybele.

On the other hand , Gimbutas has presented another asseverations that stand in contrast with this balance on the functional complementary role of the sexes, both the sacred and profane f i e ld s.

She argues that the Old European pantheon shows a society "dominated by the mother" and for her it is not very important the representation of the male divinities.

She also  says that the principal divinity, the Great Goddess, is androqynous and a supreme creator that fashions all the life to her own (as opposed to the Indo-European "Earth Mother" who must be fecundated by a male deity in order to conceive).

F i nally , she presents the idea of a " matriarchal society in the Old-Europe in the same sense as it was in the past 19th.  Century, (elsewhere as a matrilinear  society) and from there she continúes to contrast it with her idea of an extreme patriarchy represented by the Indo-European people. Gimbutas said that the matriarchal Old-European societies were savagely destroyed by the

It is on this idea of the opposition among the cultures and violent changes in all  the ways, where we want to pay attention and refer to the fact that this  fight is found in all classical mythologies, mainly in the combat   of the heaven divinities, typical on the new Indo-European pantheon, against a monstruous and autoctone being who is usually represented in   a   snake   form. This being   has been understood under d ifferent  forms by various  authors.

In Durmèzil' s opinión (1942: 126 ff.), the fight of the hero against a three-headed dragón is probably the

reminiscence of an archaic initiation ceremony, where the snake was a protector qenius of the life's beginning.


Three snakegods from the Acropolis

But this initiation not always belonqs to the heroic model as it occurs in others hagiographic accounts, like de french  accounts of the  Saint Samson , Saint Joulian, Saint Margaret or Saint Bié (SEBILLOT, P, 1904; I, 468; III, 1906: 29S, 293) . Also, as M. Eliade remembers, (ELIADE, M, 1972: 45), the dragon , out of its  eventual role in the heroic initiation ceremonies and myths, is also included in many other traditions  of cosmological

symbolism (like the Hinduism and some African cultures); it symbolizes the involution, the pre-formal way of the Universe, the "One" not -fragmented before the Creation.

Saint Margaret  and the dragon

Also snakes and dragons are identified in almost every place as the "place owners", as the "autoctonous", against to whon  the just arrived people have to fight, as Autran  has said (1946,66 y s.).

The snake appears then as the latent, as the preformal   and    the    indiferentiated   one  (ELIADE, 1972: 69) , concepts against the indoEuropean form  and organization of the invaders.

The snake representa the spirit of the deads; she ressambles the ancestor founder of the house, as the classical mythology shows : Sosipolis from Elis, Kycreo from Salamina and   Erictonio and Kekrops  from Athens appear as snakes. (PAUSANIAS I,24,7; I,36,1).Cecrops was considered to be the founder of Greek civilization and the city of Athens. He was also credited with introducing writing, the custom of burial, marriage, monogamy, bloodless sacrifice and to have dedicated Athens to Athena.

Cecrops ,  the first king of Attica who was half-man half-snake ,  was worshipped by Poseidon's side in the southwest corner of the Erechteion on the Acropolis of Athens, and his tomb was believed to lay under the same temple. The Acropolis was called Cecropia and some peoples were named after him.

The first king of Attica who was half-man half-snake. He had no parents and was believed to have been born out of the earth. He had three daughters, "the dew sisters"; Aglauros, Pandrosos and Herse. Aglauros was worshipped on the north side of the Acropolis, and the young men, the ephebes, would pledge allegiance there when they did their national service. According to some versions she had thrown herself off this side of the Acropolis so that the Athenians would win the war against Eleusis. Pandrosos was worshipped on the Acropolis as well, west of the Erechteion, where the olive tree of Athena stood.

Cecrops was considered to be the founder of Greek civilization and the city of Athens. He was also credited with introducing writing, the custom of burial, marriage, monogamy, bloodless sacrifice and to have dedicated Athens to Athena.

Cecrops was worshipped by Poseidon's side in the southwest corner of the Erechteion on the Acropolis of Athens, and his tomb was believed to lay under the same temple. The Acropolis was called Cecropia and some peoples were named after him.

Three snakegods from the Acropolis

The  figures of  women with  snakes seem to mean the relation of the female with the male procreation.

Some of the best known figures have been  found in Crete.  In this ones , what Neumann considers the female part (NEUMANN p,.Í43 y ss,, ) can take the  form af a vessel, or of a correspondíng female symbol- cist, bowl and so on- or else it may appears in human-form as goddess or priestess , bearing the snake in her arms or twined round her body. In either cases, the snake treats the Feminine   with familiarity (Fig.s 1,4,8).

The relation between vessel  and snahe plays an important role in the Eleusinian mysteries; it is also illustrated by a Spartan coin, published by Neumann (NEUMANN, op. citn p. 144.) (Fig.    ).

The connection between goddess and snake appears in Greek and Rome representations, and also in the Egyptianizing representations of Atargatis and the coin showing Isis, with snakes (Figs.. 2 y 3 ).

The snake is so universal and polyvalent as a symbol that in this work we cannot go into its areas of meaning.

In line with  its  uroboric  hybrid nature , the   snake  symbol   may  also appears as feminine.

Because the feminine vessel  is creative , the   womb   is   the   sacred   precinct, the   truly   numinous feature e  in body   symbolism, and like everything that is  numinous it  is  ambivalent  and  ambiguous.

The snake is associated with it in a subordínate role. Like the male and phallic element, it appears as a part of the Feminine or as its companion. Thus the snake in Crete and India is    an   attribute of  the  female deity, and it is at the same  time  her  male -phallic companión.

As lower earth serpent of fertility, the snake is part of the   Earth   Goddess and as underground water it

fecundates her womb; or else it may represent   the upper and celestial water, the nous spirit serpent that enters the feminine soul and guides it( as Neumann sayss:  in the manner af the Holy Spirit,)    or also

fecundates  i t  by   seduction.

But let´s come back to the idea of the fight between a primordial being, the snake, and a heavens god.

In    the vedic mithology,   I n d r a ,  the most popular  god , the heroe, the master of all humidity   and of all genesic powers, fights    against the Vritra dragón,  the giant that retains the   waters    in    the mountain

This is the most important mith  in the Rigveda.

Emblem of Ningizzida  , snake-god of  King Gudea of Lagash, 2025BCE.

The combat  of  a  god  against  a marine or ophidic monster  is known , a  very spread mythical subject.

the combat  of the    sumerian  god Ninurta  against  Asag ; the batle  of Marduk against  Tiamat ,

The figth of the hittite thunder god  Tagainst the snake Illuyankas ,